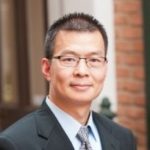 Dr. Liu earned his PhD degree from Peking University, followed by 4 years of postdoctoral training at Northwestern University in Chicago. His academic research was focused on molecular mechanism of carcinogenesis.

We use cookies to ensure that we give you the best experience on our website. If you continue to use this site we will assume that you are happy with it.Ok